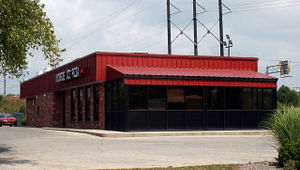 Their new location in front of K-Mart

Monroe County Pizza Department was a sit in, carry out and delivery pizza restaurant on the west side of Bloomington. They had been popular with people on the west side for years. Their logo incorporated the design of a sheriff's badge.

Originally located farther west at 3890 W 3rd Street, the restaurant was forced to move due to a fire that originated in their store around 3:30pm on August 1st, 2007. They were able to quickly reopen in their last location in the building across from K-Mart and next to the Outback Steakhouse.

In 2009 the restaurant was sold to Ernie Coffman. He added gourmet pizza and beer to the menu and extended store hours, along with adding some additional televisions. In 2019, the restaurant closed.