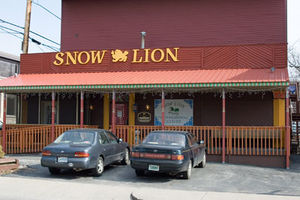 As seen from across Grant Street

The Snow Lion served Tibetan and Indian cuisine, and was owned and operated by Jigme Norbu, the nephew of the Dalai Lama of Tibet.

The Snow Lion was known for their rich and exotic dishes, as well as for holding their recipes highly secret. Only a small amount of the food is authentic - the dishes are lacking in Yak meat and milk - the dishes are exotic and Americanized at the same time. The Jasha Thupka, chicken with egg noodles and vegetables, might have been the most popular dish; you could have asked for Chef's Challenge spicy if you feel brave.

Although very small, the Snow Lion was one of the most famous restaurants in Bloomington, and was featured as the answer to a Jeopardy question on December 15, 1995. The answer was: "This religious leader's nephew owns The Snow Lion chain of Tibetan-themed restaurants in Indiana." 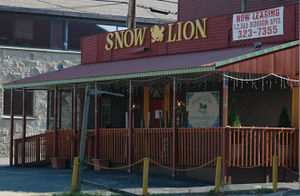 As seen from the corner of Grant Street and 4th Street
Retrieved from "http://www.bloomingpedia.org/w/index.php?title=Snow_Lion&oldid=32345"
Categories: