The Briar & The Burley 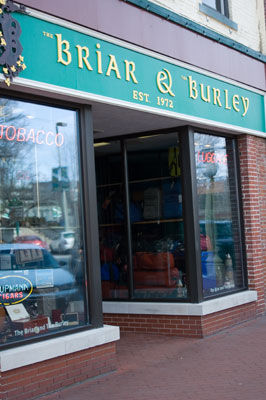 As seen from the sidewalk

The Briar & The Burley is a tobacco and luggage shop located on the south side of the downtown square. It carries a selection of cigars, pipes, and tobacoo in addition to travel-related items. It was opened by Mike Fisher in 1972.

Formerly located in College Mall, the store moved to Fountain Square Mall in 2004. Mike Fisher decided on the move after the JCPenney anchor store closed down in 2001. It was immediately adjacent to Penny's. When it closed and there were no announcements about a replacement, the former entrance to Penny's was filled with a wall of vending machines, greatly diminishing foot traffic near the store. In addition, Fisher became discontented with some new policies that Simon Malls was implementing with regard to his store. It seemed like a good time to move downtown, where he was immediately thrilled with the response.