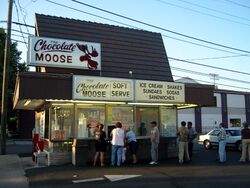 The old building which was demolished.

The Chocolate Moose is an ice cream and sandwich stand in Bloomington serving homemade as well as soft serve ice cream and yogurt, in addition to other foods and novelties. It was located at 401 S. Walnut St. until the summer of 2016, when it was demolished and moved.

The ice cream shop is the continuation of a business called May's Cafe, which was located in a wooden house where the May Building now stands. It was started in 1933 by Elmsley and Cletus May. Their son, Doran, moved the ice cream shop to the smaller building where it stood until 2016, and renamed it the "Penguin". Although closing for a time, the May family reopened it in 1983 as the Chocolate Moose and it has operated continuously since then. There was some parking on Walnut Street as well as in a small parking lot just to the east of the Moose. In the summer of 2009 movies were shown on the north wall of the May Building on weekends.

In 2016, attempts to have the iconic stand declared a historic landmark failed and the structure was demolished to make room for a four-story office building. <ref>Melanie Metzman, "Chocolate Moose will be demolished and moved." Indiana Daily Student, March 31, 2016.</ref>

The business moved to an indoor location at 405 S. Walnut St. and the menu has been expanded to include vegan ice cream and other unusual treats. There is also a Chocolate Moose at 900 E. 7th St. inside the Indiana Memorial Union and at 278 Van Buren St. in Nashville, Indiana.

The Chocolate Moose can be fairly well described as an important cultural landmark to many Bloomingtonians. Its location near the site of the former Bloomington High School has done much to create deep sentimental attachment among some former students of that school, and 'The Moose' remains popular with young and not so young Bloomingtonians and visitors today.

In 2009 the Mays sold the business to Jeff and Joani Grossnickle. Operation is seasonal rather than year-round, but they are looking to expand into some year around business. Contact them at mailto:chocolatemoosejeff@yahoo.com.

They serve a variety of homemade flavors and sundaes, but also vegan / dairy-free frozen treats and non-dessert sandwiches. Large bags of ice are also available. Their full menu is online.