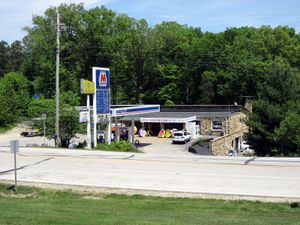 The Fishin' Shedd is located at 4855 S. State Road 446. The Shedd family has now had three generations of the family that have been employed at the Shedd. The Shedds also are involved in the Lake Monroe Boat Rental and The Outback Marine, which is next door.

This business was first opened by Richard "Dick" Shedd on April 1st of 1968. On the recommendation of his friend McCormick, he bought a 1 acre piece of land on Lake Monroe where the building is now. Originally there was a big hole in the lot and he had to use almost 10,000 yards of fill dirt to build the slope up in order to support the building. While he was filling in the area, an architect drove by and offered to design the building.

The store has always been open long hours during the day and 365 days a year. It almost is never closed. In the late 60s, early 70s, there were a few years when the store would stay open 24 hours on Friday and Saturday.

Shortly before Dick's death, he with the technical aid of Zeke Henline, developed a website for The Fishin' Shedd, which now has a remembrance page for him.

Dick Shedd passed away April 16, 2000, and since then his son Rick Shedd has taken over most of the operations that take place at the lake. The Lake Monroe Boat Rental was passed on to Rick when Dick was still alive and is located inside Paynetown Recreation Park. They rent different kinds of boats from waverunners to double decker party boats. A job here is in high demand for local highschoolers, for who wouldnt want to spend their summer at the lake? The Outback Marine is located directly next to the Fishin Shedd and is a great place to go if you ever encounter any problems with your watercraft.

Customers are able to find almost any items at the Shedd that they would need for a weekend at the lake. The store is open year round and is considered a good place to go if you need advice on whats biting at the lake. They sell a wide variety of fishing tackle, live bait and artificial. You can purchase hunting and fishing licenses there, and also a state deer and turkey tag in station. They have gas pumps in front of the store as well as food, drinks, ice, information.

There is a computer with internet access at the front of the store so that information can be referenced online.