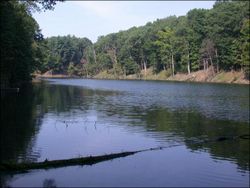 University Lake is a small reservoir northeast of Bloomington. It is located just off the IU Golf Course in the Griffy Woods Nature Preserve.

The lake was originally intended as a means of backup water distribution to the IU campus in 1911. At that time, water shortages forced the City of Bloomington to cancel their water contract with IU, compelling the university to create its own freshwater reservoirs. The dam was built in 1911 and made larger over time as the university wanted to increase its carrying capacity.

The dam and lake exist to this day on 16 acres and primarily serve as drainage for the IU Golf Course and surrounding forest as well as an educational center for students. The site of the former pump station still exists as a foundation, though few ruins from former structures remain. The lake is confirmed by a Bloomington Herald-Times sports editor as having been a favored fishing spot of former basketball coach Bobby Knight.

The lake itself is prohibited to the public, and former trails managed by the City of Bloomington Department of Parks and Recreation have been taken over by IU and fenced off. The lake is now part of a university-designated nature preserve and only specific faculty and students may enter. The lake is accessible through the IU golf course main path, though this may or may not be a legal means of entry.