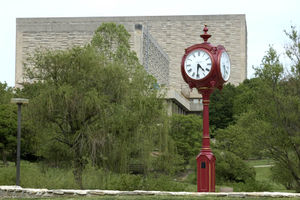 Looking through the Arboretum toward the Wells Library.

The Arboretum was built on the old site of the 10th Street Stadium which took up space between the Herman B Wells Library and Woodlawn Field. Construction of the Arboretum started in 1979 just after completion of the filming of Breaking Away. There is a long stream that runs into a retention pond near the center of the arboretum; water is continually recirculated from the pond up to the head of the stream.