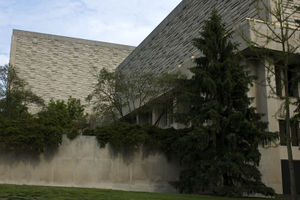 Northwest corner as seen from the Arboretum.

The Wells Library is the centerpiece building of the Indiana University library system. It is located on the corner of 10th Street and Jordan Avenue, just to the east of the Arboretum. It was opened in 1969.

Formerly the Main Library, the building was named the Herman B Wells Library in a ceremony on June 17, 2005 in honor of the three time president and chancellor of Indiana University, Herman B Wells. 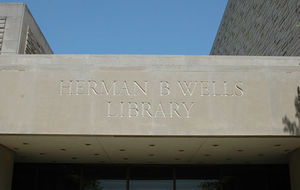 South entrance to the Wells Library.

There is a persistent urban legend that says the library was not designed with the weight of books in mind, and has been sinking inches every year. Aside from the fact that it would be completely underground at this point, the library is built on a 94-foot layer of limestone.