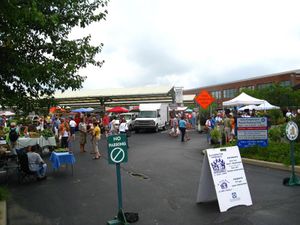 The Bloomington Farmer's Market is a weekly open market in the summer where Monroe County residents can purchase food and plantlife directly from farmers. Entertainers and prepared food vendors add to the market so that it becomes a destination rather than just a place to buy food. Normally open from April through October, the market operates from 8AM to 1PM on Saturdays. It's currently located in Showers Common next to Showers Plaza and City Hall. A separate Winter Farmer's Market occurs in the off-season.

The Market began on July 26, 1975 in Third Street Park with 23 vendors, and continued there until it outgrew the location in 1982. At that time it moved to the Courthouse Square, where it remained until the renovation of the Courthouse necessitated its move in 1984 to the parking lot at Sixth and Lincoln. In its third location the Market prospered, averaging over 50,000 customers per season, served by over 60 vendors. In 1998, its 24th season, it moved to a permanent location at Showers Common, a covered site designed specifically to house the Market. In 1999 the Tuesday Market opened on the Showers Civic Plaza. Through its quarter century of existence, the Market has enriched the life of the community by providing a place for residents and visitors to come together in a festive atmosphere, buy local produce from those who produce it, to listen to music, meet friends, and to enjoy a relaxing morning in beautiful surroundings.