The Harris Grand Theater, which was located on the corner of 7th Street and Walnut Street where the Omega Building now stands, was Bloomington's preeminent performing arts venue. Bob Hope and other appeared there in vaudeville shows. The Harris's (sic) and the Vonderschmitts were Bloomington's most famous impresarios.

As a side note, the Harris had fallen some in stature by the 70's, when Kerasotes (which also owned the generally raunchy Cinema West drive-in) was running such fare as "Deep Throat." The theaters last gasp as a performing venue was in '71 or '72 when, with great doubts about whether the projection screen -- immobile for more years than anyone cared to remember -- would survive being raised for a concert by John McLaughlin and the Mahavishnu Orchestra. The screen did survive, and the sound in the theater was excellent!

The theater was originally called the 'Harris Opera House' and was built in 1907. It was designed by the firm of Nichols & Son. 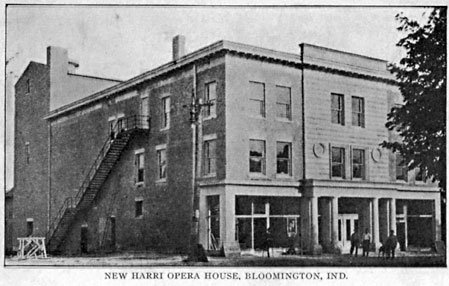