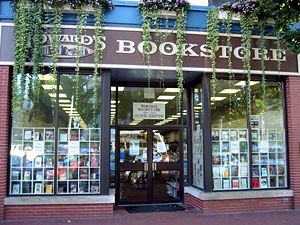 Originally started by former General Motors parts and service employee Howard Canada as a retirement project, Howard's Bookstore became a staple business on the Bloomington downtown square. Operated for 22 years by Jane and Howard Canada, the store specialized in special orders, children's books, and local southern Indiana history. The store closed at the end of February 2013.

Over the years it occupied four locations adjacent to the Monroe County Courthouse. It started out in the old Allen Building, but moved to the south side of the square shortly afterwards. In 1987 it moved to the Kresge Building, owned by Bloomington attorney Ken Nunn, when CFC, Inc. began renovating the Fountain Square Mall. When Kresge building rents increased in 1992, Howard Canada made the decision to move back to the now-renovated Fountain Square Mall into virtually the same space the storefront had occupied before.

The store was locally reputed for always having a cat or two running around the store. Initially retained to catch mice in the early locations, when the store moved into the newly renovated Fountain Square Mall, the cats were employed more for public relations. Customers became familiar with all the cats:

In 2003, Joie began bringing G.B. Packer, a Shetland sheepdog to work with her. For the most part he remains behind the counter.

Memorium for Jasper (written by Joie Canada on December 9th, 1997)

In Memorium
I wish I could be as eloquent as the poet in his tribute to his cat, Geoffrey, but I can only do what I can do. Our much beloved friend, Jasper, died in his sleep this morning at the age of 14, after long and faithful service as Greeter, Lap Sitter, Mouse Remover and general Faithful Friend.
He began his career as a store cat at a very young age, and never shirked in his duties or suffered from career burnout. He was a determined and skilled Ether Game player and helped us move the store three times, offering helpful suggestions and comments all through his life. We will miss him greatly.
He is survived by his half-sister and cousin, (these things can be complicated) Pearlie Mae, and by numerous nieces and nephews, as well as his great-grandmother.
This is a sad time for us and it will be lonely for a bit. We hope that one of his young nephews can step in and help us out, but nobody can really replace such a wonderful, friendly and cheerful creature as Jasper was.
He will be buried on the family farm where he was born. I am sure all his friends will be glad to know that his passing was swift and easy, and that he died as peacefully as he lived.
Howard's Bookstore, December 9, 1997.