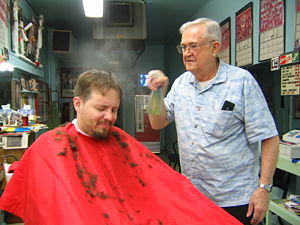 Hyscel Ward was born in Leipsic, Indiana in September 1934 and grew up in Orleans, Indiana, where he played high school basketball. In the 1950s he served in the United States Army in Germany. After leaving active duty he returned home and worked in a factory with his father. The chemicals in the factory made him and ill and he decided to go to barber school. Ward received his barber license on May 31, 1960. He began working as a barber at Woody's Barber Shop in College Mall. He remained at College Mall until 1975 and later opened his own shop on N. Walnut Street. In 2010 Ward celebrated his fiftieth year cutting hair. His business telephone number is 812-336-0092.

Ward has been married for more than fifty-years.