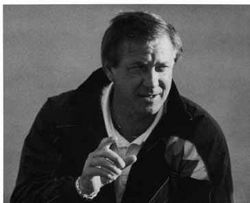 Yeagley came to Indiana University as a Physical Education teacher, and started coaching the soccer team when it was just a club. With no money or expenses, he kept the team on the road and competitive. In 1973, the University began fully supporting the team.

Jerry Yeagley is the only soccer coach to win the NCAA Divison One Coach of the Year twice, in 1976 and 1980. He is also the NCAA Division One's all-time winningest coach, with a record at retirement of 544-101-45. He was inducted into the National Soccer Hall of Fame in 1989.

When Yeagley retired in 2003, the soccer field at Bill Armstrong Stadium was named Jerry Yeagley Field.