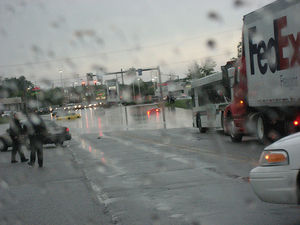 Flooding at 3rd and the bypass on June 4th

Starting June 4th, 2008 and going until at least June 8th, a series of floods swamped Indiana south of Indianapolis and as far west as Terre Haute as far south as Columbus and now Worthington and Bloomfield. According to a river flooding meter in Paragon, it could be the worst flooding the area has seen since 1913.

In the late afternoon of June 4th, 2008. A major thunderstorm ripped through Bloomington. Causing heavy rain, lightning, high winds and hail. The rain came down so intensely that at the peak of the showers, that visibility was cut down to about 100 feet. The day before there had been another intense thunderstorm, leaving the ground saturated.

The result was many flash floods throughout the area. The most notable is probably the large 4 foot deep pond that developed at the intersection of Kirkwood Avenue and Dunn Street, flooding many businesses there. Some had not seen flooding since before The Big Dig Project in 2000. Many roads that had water running over them were damaged, leaving some large potholes in places. Parked cars where carried into the middle of streets, some cars being driven through the currents where carried off road and into small ravines.