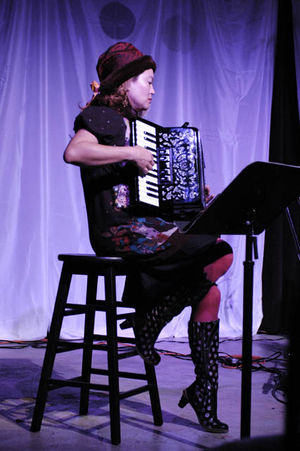 Sophia playing at the BPP with Krista Detor. Photo by Yvonne Avery.

She was also well known for playing the accordion and performing in her bands, Lola, Mitten, Hoosier Squeeze, and her own solo efforts, including the CD Releases Music for Swimming and Music for Picnics.

She married Greg Travis in 1997 and they had one child, Finnegan William Travis, b. 2008. They lived in the historic Ketcham House with four cats and a dog, where Greg and Finnegan continue to live.

Travis died suddenly in 2012 of an undiagnosed heart condition.