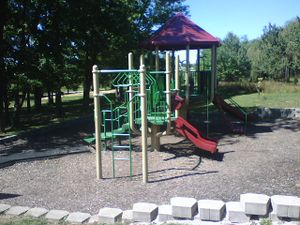 Playground next to shelter house #5

Karst Farm Park is a large park on the west side of Bloomington next to the Monroe County Fairgrounds and the Monroe County Airport. It is the main home for youth soccer in Monroe County, and also provides field rentals for Ultimate Frisbee players and other teams. There are also a disc golf course and a short walking track, which surrounds a large sinkhole depression, or karst. There are many of these in the park.

To get there, go out 2nd Street across Curry Pike and turn right at the first light.

The land for the park was acquired by the county in 1892 and was originally used as a Poor Farm. Between 1989 and 1992 the first four fields were constructed, and by 1996 more than 3500 players were playing in county soccer programs. The Parks and Rec board requested funds for two new fields, but were turned down.

In the summer of 2008 a dog park was opened. Previously a more popular Dog park was at the base of Griffy Lake dam.