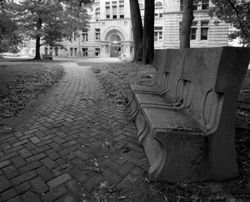 A view of Kirkwood Hall as seen from Dunn's Woods by Kagan Tuncay.

Kirkwood Hall is a three-story classroom and administration building at Indiana University, just south of Wylie Hall. It is the location for the College of Arts and Sciences.

Designed by the firm Parker & Jeckel and built in 1894 at a cost of $50,000, oolitic Limestone was used in its construction. At the time of building it faced onto 4th Street. It was 130 feet long and 76 wide, with a central tower 100 feet high.

Eight rooms in the basement, which had an 11 foot ceiling, were dedicated to the physics and psychology departments; eight rooms on the first floor were for the law department and lecture halls, and the main hall was thirteen feet in width.