Boil up some Parliament-Funkadelic seasoned with a dash of Jimi Hendrix simmering over a Public Enemy. Mental Afro combines hip hop lyrical prowess with funk and rock for a dynamic presentation. This 5 character band appeals to music listeners who enjoy such current groups as The Roots, N.E.R.D., Jurassic 5, Red Hot Chili Peppers, Common, and Gnarls Barkley among others.

Mental Afro first performed in the Spring of 2005 and revived in late 2006. The band consists of five musicians who have a wealth of performance and recording experience between them. From Las Vegas showrooms, to the Great Wall of China, to the nightclubs of the Midwest, the members have been performing music most of their lives. In 2007, the band continues to expand their live shows at venues throughout the Midwest and promote their first CD.

The debut, Mental Afro, is a collection of 12 songs that the band has written, rehearsed, and performed live over the last few years. The recording was mostly done 'live' in one day at Farm Fresh Studios by Jacob Belser in Bloomington,Indiana. The band drew inspiration from the converted church as well as the infrequent burial that occurred that day in the crowded graveyard next door.

The band debuted their first CD release in May 2007 in traditional album format. From the heavy hitting opener, "Rock U", to the equally heavy and political closer, "Military Minded", the band takes the listener for a fun ride. It's got the funk/hiphop/pop of "Rollin", "Official" and "Floatin" as well as the rock-trio sound of "Sometimes It's Music" and "Kiss My Jazz". The band lays on some latin style with "Hot Sauce", some reggae with "2 Sexy", some funk-rock with "Tangerine" and some straight-up funk with "Mental Afro" and "Get Your Comb". 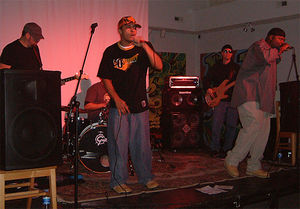 The essence of the band began in 1999 when Tee'Mon Norris and Brian Courtney were starting to get a new band together after performing in two of the most active mid-90's bands at Indiana University in Bloomington, Indiana - Fambooey and Flattus. Both bands were named when the Bloomington music scene was featured on the cover of Billboard Magazine in 1996. Tee'Mon and Chaz collaborated on many projects including the 9 MC and 1 DJ Bloomington act, Fifth Element. Mental Afro officially formed in September of 2004 and first performed in the Spring of 2005. Tee'Mon Norris, Chaz Brown, and Brian Courtney were joined by Quincy Sanders on sax, Dave Scimonelli on drums, and Chuck Hobson on guitar for a total of four shows at Uncle Fester's House of Blooze (now known as Fester's Jungle Room). After a year pause, Mental Afro hit their collective 'PLAY' button again in October 2006 as they were joined by drummer Neil 'The Greek' Michalares and guitarist Marvin Leeroy Druin.