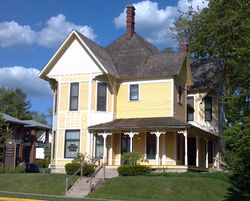 The Morgan House is a historic residence north of downtown Bloomington at the intersection of Tenth and Walnut Streets. It was built in 1890 in the Queen Anne style according to a design by nationally-known architect George Franklin Barber; the house is wooden and painted yellow. By the late 20th century, the house had fallen into decay; it was the home of an elderly woman who was unable to maintain it properly. Eventually, she sold the property to Bloomington Restorations, which completed a large-scale rehabilitation project and restored the house to a state resembling its original glory. Today, the Morgan House is not a residence; it has been divided into offices for several different small companies, including a law firm and a chiropractor.