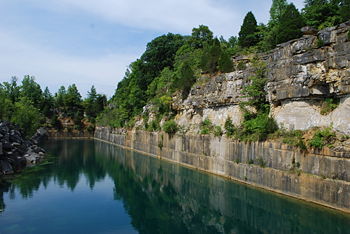 Rooftop Quarry is one of the water-filled quarries around Bloomington made famous in the 1979 movie Breaking Away. The quarries enjoy a unique history in the surrounding area. Each one has a story to tell, and Rooftop Quarry is one of the most popular. However, Rooftop Quarry and most other quarries are situated on private property, so visiting the quarries is trespassing and illegal. But the attractions of these rocky pools are manifold: there is cool water to swim in and rocks to sunbathe on, and, of course, the quarries have been made famous by the jumpers. Quarry jumping and swimming have been popular in the Bloomington area for decades, and before the construction of Lake Monroe quarries were some of the only places to swim in the area.

Rooftop Quarry, originally named “Sanders Quarry”, is owned by Indiana Limestone Company and is marked with multiple “No Trespassing” signs. Directions to Rooftop and other quarries generally spread strictly by word of mouth due to the illegal nature of the activity, but the quarry nevertheless remains a popular party spot, and the remnants of many drunken festivities are generally visible along the shores. The area surrounding the quarry is decorated with beer, liquor bottles, cigarette butts and drug paraphernalia. Graffiti spray painted onto the rock walls tell the names and stories of many past visitors.

Jumping into an obstruction filled pool is quite dangerous, but the thrill and danger of quarry jumping is quite popular among pastime for young locals, not only Indiana University students and townies, but even the occasional tourist.

Jumping into the quarry from the top peak of Rooftop, roughly 65 feet above the water's surface, is an extremely high dive. High diving is an extremely dangerous sport and should not be attempted without professional training. Many men and women have been seriously injured or killed from hitting the water at high speed. Afficionados say the secret is to land feet first and straight, but even in the best circumstances the diver must beware of numerous underwater obstructions including old machinery, abandoned quarry equipment, large rocks, and even railroad ties. Divers say, though, that this is part of the experience. The excitement for many thrillseekers is in taking the chance, and some jump simply for bragging rights.

Jumps have resulted in severe injuries - compression fractures, collapsed lungs, and multiple cuts and bruises - and in some cases fatalities: Walter Ayala died there in June of 2008 after attempting a dive from the top peak. Other deaths include:

Some have visions of what the quarries futures will hold. Victoria Schopp, co-owner of several specialized contracting services, has a dream of her own for the quarry. She first found out about the popularity of the quarries by word of mouth. She wondered “why such a beautiful place can only be enjoyed by drunks and young adults willing to trespass.” Her vision began here. She hopes to be able to someday turn the surrounding area of Rooftop into a park for the community to enjoy. Through much research and talking to owners, she has acquired property adjacent to Rooftop that was quarried by Victor Oolitic, and the process of acquiring more land is still underway. Schopp believes that the quarries could sill be used for swimming and diving. “The goal is to keep the quarry atmosphere but improve safety,” says Schopp. She says that the biggest dangers are the invisible underwater obstructions. “ During park construction, swimming and jumping areas could be cleared of obstacles.”

Schopp says her biggest obstacle for getting the project underway is time. “This project will not provide any income for me, so I have to work on it in my spare time. Prior to getting investors or community support any money spent is out of my business and this adds to the challenge,” says Schopp. She hopes and dreams that the community will benefit from such a dream. Schopp says, “We are a ‘green’ community and I believe people will be excited by this park.”