South Griffy is a wooded suburban area between State Route 46 and Griffy Lake. It's bounded on the East by the IU Golf Course, on the North by the Griffy Lake Nature Preserve, on the West by the Meadowood Retirement Community and on the South by SR46. Just across SR46 from the neighborhood is the Unitarian Universalist Church, the old State Police station, and the IU Sports Complex, including Assembly Hall. 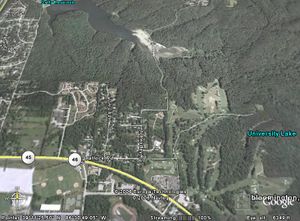 The South Griffy Neigborhood is in the foreground, with the nature preserve and Lake Griffy behind. The view was created with Google Earth.

The principal road is Matlock Road, leading to Headley Road which in turn leads to the Lake. This artery is a major bike path leading out of the city. The largest side road is Browncliff Lane.

There are 92 households in the neighborhood. These are primarily single family homes in an area, with a little rental housing available along Matlock Road. Many of the residents have lived for years in the community, and include prominent IU faculty, local entrepreneurs and writers.

The neighborhood is served by the University Elementary School, by Tri-North Middle School and Bloomington High School North.

South Griffy maintains a neighborhood association under the guidance of the city's department of Housing and Neighborhood Development. SGNA generally meets twice a year, and is a place to meet neighbors and work on neighborhood projects. One such project is gathering oral histories from the oldest residents. The current SGNA president is Brandon O'Leary.

A city map of the neighborhood is available at the City of Bloomington website.