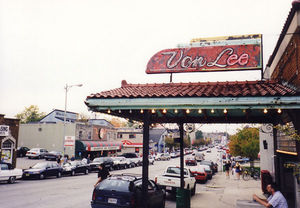 Looking down Kirkwood Avenue under the awning, by Andrew Stoeckley.

The original Von Lee was a downtown movie theater located at 517 E. Kirkwood Avenue, near the corner of Indiana Avenue and Kirkwood Avenue. Bought by the Kerasotes Theatres group in 1976, it was closed down in 2000. The Von Lee sits just off campus near the Sample Gates and is close to Peoples Park.

It was originally called The Ritz when construction was completed in 1929. Renovated into a grocery store in 1930, it was called Peterson's Market. It was reopened as a theater and renamed in 1948 by the Vonderschmitt Family, and bought by Kerasotes in 1976. 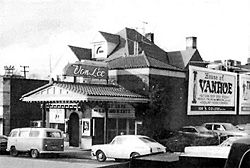 After it was closed by Kerasotes the theater faced the wrecking ball. There was a quick response from City Council member Chris Sturbaum to save the history of of this building. He began to lobby the community to save it and developed a plan to do so. For many weeks after the first notification of demolition Chris set up a display about the history of the Von Lee and its significance to Bloomington. He even began to show movies in front of the closed building. Eventually the plan worked and the Von Lee was kept intact.