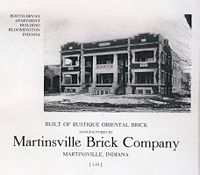 Arbutus Flats was an apartment building located at 414-418 E. Kirkwood Avenue. It was built by Indiana University President William Lowe Bryan and Charles Booth. Herbert L. Bass was the architect. The building had six apartments and was built of brick with stone trim, composition roof, hardwood and pine millwork, hardwood, pine and cement floors and electric light fixtures. Bids were taken twice as plans required revision after the first bids were taken. J. O. White was ultimately awarded the general contract in May of 1911.

Letters in Bryan's files at the University Archives indicate that there were problems with the roof and basement windows leaking immediately upon completion of the building. Bass responded that given the minimal time alloted to complete the project problems were perhaps not surprising.

A photo of the building can be seen in an advertisment in an architectural exhibition catalog. The building is no longer standing.