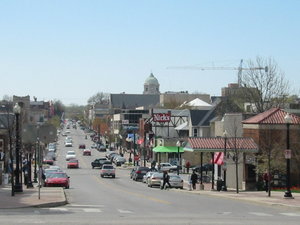 Kirkwood Avenue from the Sample Gates.

Kirkwood Avenue is the street at the heart of Bloomington. It runs from the Indiana University Sample Gates westward to Adams Street, on the north perimeter of Rose Hill Cemetery, where most traffic diverges to Adams which quickly becomes West 3rd Street. With its wide array of bars, restaurants, and businesses, Kirkwood serves as a popular spot for IU students and Bloomington residents. Although the street is officially named Kirkwood along all of its length, many people consider "Kirkwood" to only be between The Square and the IU campus, with parts west of College Avenue called "5th Street" still by certain people. A small extension of Kirkwood continues past Adams Street, passing Kleindorfer Hardware and Ritter Street.

The one section of Kirkwood/5th in the city still signed as 5th Street is on the east side in the Green Acres neighborhood. It runs from Union Street east, passing Bryan Street and Hillsdale Drive, finally stopping in a dead-end east of Overhill Drive and just west of The Bypass

Starting at the Sample Gates, a traveller passes by the Bicycle Garage and Peoples Park on the right, and Kilroy's on Kirkwood on the left. Farther along are the Monroe County Public Library and two churches. Before reaching the Square, one goes by the Allen Building, the Buskirk-Chumley Theater, and the Odd Fellows Building.

Kirkwood Avenue was named after astronomer Daniel Kirkwood in 1895, and the Kirkwood Observatory may be seen just south of the Sample Gates. The street originally ran through the Indiana University campus, but in 1987 the university constructed the Sample Gates, turning all of the street to the east of Indiana Avenue into a walking path.

In the summer of 2000, life was dramatically changed on the east part of Kirkwood when the city initiated The Big Dig to revamp the 100 year-old storm sewer system underneath Kirkwood. The dig area on Kirkwood was mostly between Dunn Street and Grant Street, although traffic was closed between Indiana Avenue and Grant Street. This affected several of the businesses in this area as it was difficult for customers to access storefronts. The project finished in October of 2000.

Stripping the asphalt in August of 2012 for a refinishing between College Avenue and Walnut Street revealed that at one point the road was all brick and the bricks remain as a foundation for the road in that area.

Peoples Park is a long-time hangout for local skaters and other people enjoying a break. Despite remodeling in recent years and the introduction of a summer lunchtime concert series, the park remains the turf of skaters and players of hacky sack. The parking lot directly adjacent is an IU lot (A, C and limited visitor meters).

The MCPL is located on Kirkwood Avenue between Grant Street and Lincoln Street.