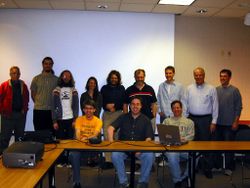 Attendees to the March 2006 meeting

The Bloomington Linux Users Group (commonly called BLUG) is a users group for people interested in the Linux operating system, GNU software and other Open Source software. They usually meet on the 2nd Tuesday each month at the Monroe County Public Library. There is also a large group of people on their mailing list, which is used as a help forum and also for general discussion. They also hold other events such as weekly Linux-centric gaming sessions and informal meetings.

Since the early days of the Linux operating system, there has been a loosely connected group of Linux and Open Source users in and around Bloomington. In the mid 90s, there were several attempts to create an official group. Often meetings where held at pizza parlors or restaurants around town. The first known series of regular meetings were started by Dave Monnier, who held a dozen or so meetings in the Monroe County Public Library in 1999 and 2000. A mailing list for the group was also created and hosted by Indiana University's department of Computer Science (what it was called at the time).

Dave wanted to pass leadership of the group on in the beginning of 2001. However nobody accepted the role initially and the group withered away a bit. Only a post to the mailing list was made every few months for the next year.

In 2002, two guys from Cook Incorporated attempted to kickstart the group again by holding a meeting on how to install Red Hat Linux. The posted an announcement to the list, but the only attendee to the meeting besides them was Mark Krenz.

The group nearly remained inactive for the next two years. When Mark Krenz and Marina Krenz officially opened up an office for Suso Technology Services, Inc in September of 2004, they decided to try to energize the Linux community again by holding regular meetings about beginners topics and promoting the use of Linux by offering Linux support through Suso.

Mark wanted to help the group grow into a non-profit corporation and raise money to help promote Linux usage in the community, but the group was not ready for such an endeavor. Upon hearing that he was going to be a father, Mark figured that he would have less time to dedicate to expanding BLUG anyways.

In January of 2007, Mark decided to resign as leader of the group and passed the torch onto Scott Blaydes, who has taken over since. Scott has continued to hold meetings at the Library and worked on organizing car pooling to IU LinuxFest 2007 in Indianapolis. 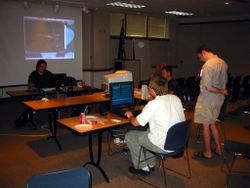 The first meeting of the new BLUG group was held in November of 2004 with 6 attendees. A variety of introductory topics where covered ranging from beginner to advanced. Over the next few months attendance grew and interest re-kindled. In 2005 meetings reached attendance levels as high as 21 and overall about 100 different people have attended the meetings. On average about 10 people attend each meeting. Sometimes refreshments are served, but the dedicated people come regardless. People have driven from as far away as Indianapolis and Terre Haute to attend meetings.

The second BLUG gaming festival held in the fall of 2005 drew about 20 people during the day.