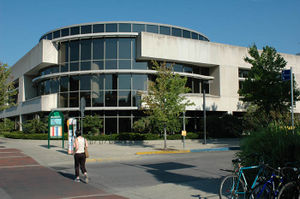 The Main Branch as seen from the sidewalk

The Monroe County Public Library is the public library serving residents of Monroe County and the surrounding communities. It has branches in Bloomington and Ellettsville, as well as a Bookmobile and homebound service. The MCPL hosted office space for HoosierNet, Inc., a local internet service provider, until it ceased operations in 2006. The library also hosts meetings for various organizations in Bloomington, such as the Bloomington Linux Users Group. It is rated the 2nd best library in the nation based on the population it serves (100,000 - 250,000). 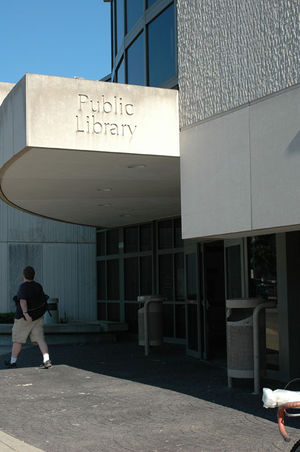 The South Entrance of the Main Branch

The Ellettsville branch is located at 600 W. Temperance Street, at the intersection of Temperance and Sale Street.

Getting a Library Card

In order to get a library card, you must be a resident of Monroe County, and you must present a picture ID and proof of your current address. If you are not a resident of Monroe County, you may sign up for a PLAC card, for a fee of $30 in 2007. This fee is set annually by the Indiana State Library. The PLAC card lets you obtain a library card from any library in the state of Indiana.

Bloomington has had a library at least since 1828, when it was housed in a two-room brick building east of the courthouse. At the time it contained roughly 200 volumes, but by 1882 it possessed more than 2000.

In 1856 the city created a library fund by selling some town lots. The library was moved to the Central School building when the brick library began to fall down, and in 1907 it was intended to move it into the newly built Monroe County Courthouse.

The current members of the Monroe County Library Board of Trustees are: