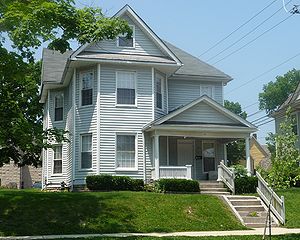 Originally platted as Bollman Place Lot 18, Morton C. Koontz was the first lot owner. It was sold to S.E. Carmichael the following year, who sold it to George Edwards the year after that. The house was built sometime between then and 1898.

George and his wife Mary lived there until around 1930, apparently renting part of the house out for much of the time; J.M. Hinkle lived at the address in 1907, and Frank and Marie Aydelotte two years later.

The "gingerbread" on the gables, patterns of shingle and clapboard siding, and asymmetrical layout mark the house as Queen Anne; however, the porch columns and railing are more classical in nature.