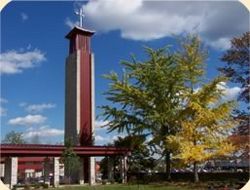 First United Church is located at 2420 E. 3rd Street. This church is affiliated with two denominations - the American Baptist Church and the United Church of Christ.

The congregation started out as a "downtown church" on the northwest corner of 4th Street and Washington Street. It was founded as the First Baptist Church in 1825. In 1956 ground was broken on the current site of the church. Originally a church on the edge of town, it's now right in the hustle and bustle of the College Mall area. The church was situated close to campus to continue its mission of welcoming Indiana University students.

The church has a history of being in the forefront on issues of social justice. Rev. Douglas Rae was a longtime leader who was active in the social gospel movement. Rev. Rae was instrumental in founding MCUM (Monroe County United Ministries) and church members are major supporters of MCUM to this day. The church was also active in the civil rights movement and racially integrated at a time when other churches were not.

In 2003, the church shortened its name to First United Church but retains its ties to both denominations.

In September 2008, First United church officially past an ammendment to the church constitution to become affiliated with the Open and Affirming and Welcoming and Affirming movements of the UCC and ABC.

In Septeber 2009, First United Church launched the inaugural season of the Tower Concert Series, celebrating the gifts of music and the arts.

The Mennonite Fellowship of Bloomington meets in the Roger Williams room at 5:00 p.m. on Sundays.