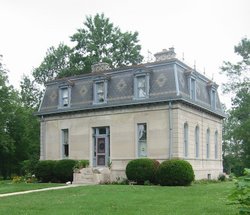 The county has an executive and legislative branches of government, the Monroe County Commissioners and the Monroe County Council respectively. The county is located in south central Indiana, south and slightly west of Indianapolis. It has a year-round population of around 121,000 people and was determined by the U.S. Census to contain the mean center of the total U.S. population in 1910.

Monroe County spends roughly $25 million annually in its general fund. Roughly half of that money goes to four categories: (1) providing employee benefits; (2) the court system; (3) the correctional center; (4) commissioner-approved work such as Stonebelt Center, the Juvenile Detention Center, and the CHAPS Clinic.

Many county departments have offices in the Monroe County Courthouse and in the Justice Building.

According to a map of Indiana from 1817 and 1819, the original county borders where truncated along its northern borders in a diagonal line from northwest to southeast. North of this line was a borderless portion central and northern Indiana.

The following cities, towns and localities exist in Monroe County.

There are 3 incorporated municipalities in Monroe County.