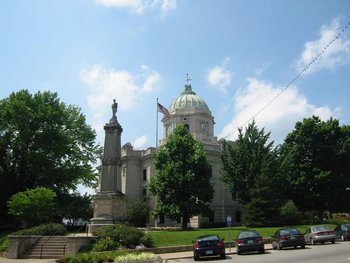 The Monroe County Courthouse is the seat of government for Monroe County and is the traditional center of Bloomington. The third courthouse to stand on the Downtown Square, the current courthouse was built in 1907 during a time of great prosperity. Wing & Mahurin designed the building. The Courthouse is the only building on the 1907 Courthouse Block, and the centerpiece of the Courthouse Square Historic District. The lawn and sidewalk surrounding the courthouse are frequently used for civic events, festivals, protests and other events. There are also many benches and areas for people to sit or lie down.

Monuments on the Courthouse Square 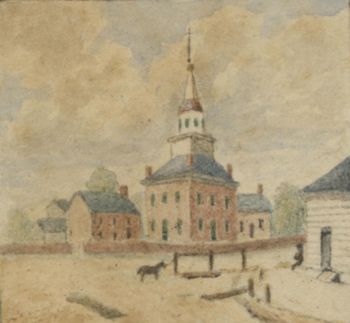 Monroe County's first court house was a dogtrot cabin, two log cabins under a single roof. They were built in 1818 by Samuel Elliott at the site of the old Monroe County jail for the sum of $400. Of the two cabins, one measured 20x20 feet and the other 12x20 feet. They were separated by a ten foot wide breezeway. Each cabin had one door, and the two doors faced each other. A window in each cabin faced the east in order to take advantage of the morning light.

Construction of a more permanent courthouse was started in 1819. It was to be a two-story, brick structure, about 40x45 feet, on what is now the courthouse square. John Ketcham was the contractor. After many delays, the new court house was ready for occupancy in 1826. The total cost was $8,300.00.

The current courthouse was dedicated on July 4, 1908. In 2007 a new copper dome was fabricated in the same style as the original and the old dome, which had long since oxidized and turned green, was replaced. Restorationists said the dome should retain the copper color for about 20 years before it begins to turn green again.

In September of 2008, old style lightposts where added at the 8 sidewalk entrances to the courthouse square. 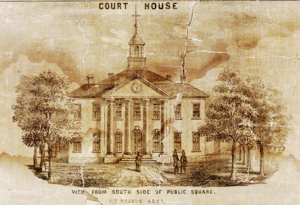 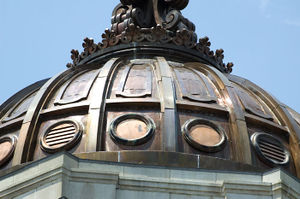 New copper sheathing on the dome.

Offices in the courthouse

Additional county offices are located in the Justice Building.

Events In and Around the Courthouse 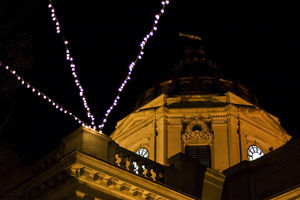 The Courthouse with its Canopy of Lights

The Courthouse in Media