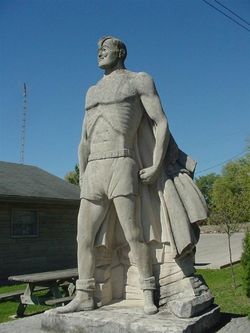 Oolitic is a small town in Lawrence County, Indiana, due south of Monroe County on Highway 37. The population was 1,152 at the 2000 census.

Limestone is at the very heart of Oolitic's history and identity, part of Monroe and Lawrence counties' shared heritage.

Fine limestone buildings can be found throughout Oolitic, but perhaps the most novel and iconic structure in Oolitic is a finely wrought, lighthearted statue of comic book character Joe Palooka.

From Wikipedia: Joe Palooka was an American comic strip about a heavyweight boxing champion, created by cartoonist Ham Fisher. With various assistants and successors, the strip lasted for over half of a century with spin-offs to radio, movies, television and merchandising.

In his home town of Wilkes-Barre, Pennsylvania, Fisher devised the character in 1921 when he met a boxer outside a poolroom. As Fisher explained in an article in Collier's: “ Here, made to order, was the comic strip character I had been looking for -- a big, good-natured prize fighter who didn't like to fight; a defender of little guys; a gentle knight. I ran back to the office, drew a set of strips and rushed to the newspaper syndicates. ”