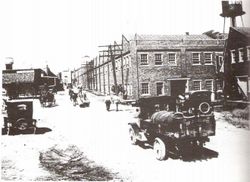 Picture of the main factory. Possibly in the 1920s

In 1868, William and James Showers bought out their father's interest in a Bloomington cabinetmaking business for $300. From this humble beginning, the Showers Brothers Company would grow to the point that in the 1920s, it produced 60 percent of the furniture manufactured in the U.S., claiming distinction as “The World’s Largest Furniture Factory.”

Little is known about the origins of the Showers family business. Charles Showers, a preacher and cabinetmaker, came to Bloomington sometime in the mid 1850s. He opened a furniture and coffin-making shop on the Bloomington downtown square shortly afterwards. At some point, Charles' sons, William and James, bought out their father's interest in the business for $300 and moved the business to a new store on Ninth and Grant Streets when neighbors complained about the noise from the shop. During the civil war, the company made coffins for war casualties.

The two were later joined by their third brother, Charles Jr., as they slowly built their business around the production of quality oak furniture. In 1884, a fire swept through Grant Street and destroyed the brothers' business. The furniture shop had become so important to the Bloomington economy that the city financed almost half of the cost of a new factory on Morton Street.

Once at the new Showers Brothers Building on Morton Street, Showers Brothers Furniture grew at a a rapid pace. They were one of the first Bloomington businesses to switch from steam power to electricity, and invented (and named) the process of laminating. The new factory produced everything from raw materials, rather than relying on suppliers. Their slogan was "From the Tree to the Trade." Although the factory averaged about 800 employees, its peak employment during the 1920s was 1,200 workers.

When the US census was conducted in 1910, the US government pinpointed the exact location where there was an equal number of people living north, south east and west at the front door of the Showers Brothers Building. The company capitalized on this free publicity and declared themselves to be the center of the universe. They installed a marker at the exact location. When the Showers Brothers Building closed down in 1955, the city moved the marker to the Monroe County Courthouse lawn.

With the onset of the Great Depression, Showers Brothers Furniture continued to expand. They were awarded a contract to produce furniture for the US Army during World War II. During the same period, the furniture industry moved south, capitalizing on cheap labor. There was also a movement to trucking as the preferred shipping method that Showers Brothers Furniture didn't adopt. When they failed to invest in updated equipment, Showers Brothers Furniture found it difficult to compete in the new economy. Ultimately, they sold their assets to the Stork Line Furniture Company of Chicago. Stork Line continued to operate the factory for three years until they closed shop in 1958. The factory was sold to Indiana University and most of it was destroyed in a 1969 fire. The only survivor was Factory Number 1, which was used for storage until Indiana University, CFC and the City of Bloomington renovated it in the early 1990s.