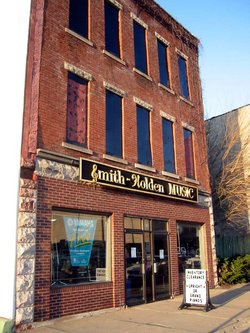 Smith-Holden Music was a professional's and student's music store located at 222 W. Kirkwood Avenue. They bought, sold and rented all types of instruments, sheet music and accessories, and offered lessons in most instruments as well. It was founded by George Holden sometime prior to 1960.

Smith-Holden went out of business in 2009. 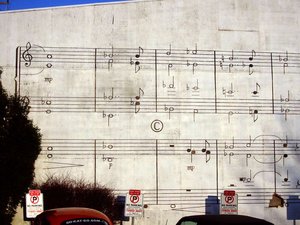 In 1976 George Holden commissioned a mural for the west wall of the store, which was one of the more recognizable features of Bloomington for many years: a giant painted music score that was clearly visible while driving up Kirkwood Avenue. The song was called Three Epitaphs and was by Dr. Thomas Beversdorf

The store went out of business and Abodes, Inc. had agreed to restore the mural as part of the purchase agreement.As Abodes began renovating the building into a restaurant and apartments in the summer of 2010, the mural was torn down, but plans to create a duplicate of the mural on more durable materials were announced. 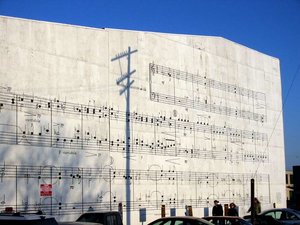