From Bloomingpedia
(Redirected from The Bakehouse)
Jump to:navigation, search 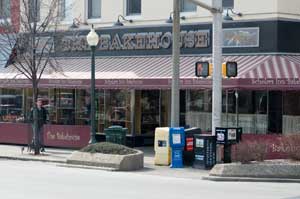 The Bakehouse has two locations in Bloomington. The main location, located at the southwest corner of 6th and Walnut on the downtown square, provides fresh baked bread on a daily basis. A second location on State Road 46 near the College Mall provides an extension of the deli and bagel service of the main location.

In addition to the two Bloomington locations, the Bakehouse maintains a walk-in area at its main bakery on SR 37. They also sell baked goods to restaurants in Indianapolis such as St. Elmo's and Keystone Grill.

The main Bakehouse location at the corner of 6th and Walnut was opened in 1995 by one the then co-owners of Michael's Uptown Cafe, Strats Stratigios, Michael Cassady and two Bloomington entrepreneurs, Michael Pollack and Michael Fitzgerald. They aimed to capitalize on a growing trend in the mid 1990s toward providing fresh-baked breads. After spending years at Michael's Uptown Cafe trying to develop good bread recipes, Michael Cassday reached out to Bloomington cookbook author Bernard Clayton Jr., who referred him to Michael London, one of the premiere bakers in the US.

With a license from London's firm, the Rock Hill Consulting Firm in upstate New York, the Bakehouse brought an artisanal bakery to Bloomington. In May of 1995, the Bakehouse purchased a $55,000, 18,000-pound Fringard oven. It is gas fired, using bricks to retain the heat at a constant temperature. The oven was purchased directly from France and took two weeks to install. Prior to the Bakehouse's opening, Michael London trained the future staff. 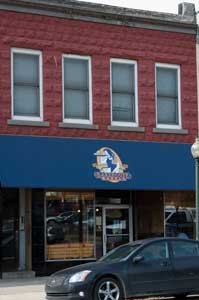 Within the first two years, the original owners, Cassady and Stratigios, sold their interest in the Bakehouse to their partners Michael Pollack and Michael Fitzgerald, who hired executive chef, Kathleen Horejz. Around this time, the Bakehouse started offering more deli services and breakfast on the weekends. Shortly after, a catering and delivery business was started, Bakehouse Catering.

After Michael Pollack's death in 2001, Pollack's partner, Michael Fitzgerald, sold control of the restaurant to Lyle and Kerry Feigenbaum. The Feigenbaums owned the nearby Scholar's Inn restaurant. Eventually, Bakehouse breads were served at Scholar's Inn.

In 2003, the Feigenbaums expanded The Bakehouse into the adjacent Ben Franklin frame shop. The new space, while connected with the original Bakehouse space had a separate entrance and was dedicated to bagels. The new space was spun off as the Scholar's Inn Bakehouse Bagels.

In early 2004, plans were announced to purchase the former Schlotsky's Deli location at 3002 E. Third Street and build a second full store. It opened in late November, 2004. In late 2005, the owners announced that they had begun renovation of the FDL Fragrance Building at 911 W. Simpson Chapel Road. In the summer of 2006, they moved baking operations to the new location to better meet the demand of their customers. Customers can purchase baked goods directly from the bakery at a small walk-in store. Visitors are treated with a window onto the bakery floor where they can watch the operation in action.