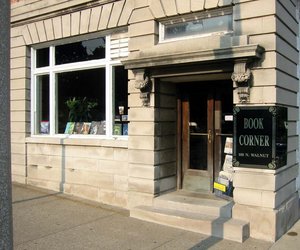 The Book Corner is an independently owned bookstore on the northeast corner of Kirkwood Avenue and Walnut Street; part of the downtown square.

The Book Corner was opened by James Spannuth in 1964 in its present location. It was the third Spannuth book store, following the Book Nook stores. The Book Corner was originally run as an extension of the Book Nook until they were closed in 1985. James' wife, Barbara Spannuth, ran the Book Corner until 2000 when she retired at the age of 86. The Spannuth's had six children, which each participated in the upkeep of the store in various capacities. It is currently being operated by Margaret Taylor, one of the Spannuth's children.

The Book Corner carries a wide variety of domestic magazines, from Anarchy to Zoetrope. They also carry several national and financial newspapers nearly as soon as they are published: The New York Times, The Chicago Tribune, The Washington Post, The Wall Street Journal, and Barron's.

Do not neglect the book section, which makes up the back two thirds of the store. There seems to be good focus on graphic novels and local history, among other areas.