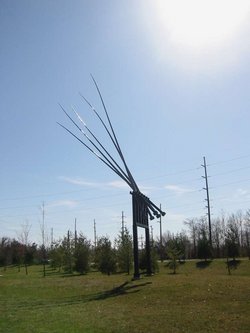 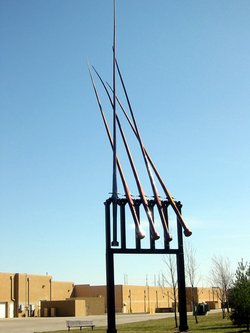 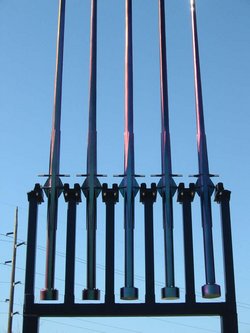 The metal wind sculpture located behind Bed Bath and Beyond in Whitehall Crossing, is the creation of Bloomington artist Stephen Powell. It is officially titled "Untitled 2001", though Powell refers to it as "Fingers". It was commissioned by Jerry Gates, who developed Whitehall Crossing in 1998. It is completely made of a bluish-purple metal with 5 finger like protrusions reaching up into the air. The protrusions lightly capture the wind and move on their hinges back and forth from horizontal to vertical all the way back. They have 180 degrees of rotation or more (never been there when it was that windy). Powell obtained the pipes in Illinois.

At it's tallest, the scupture is 70 feet tall. Each pipe weighs between 300 and 350 pounds and is attached to a counterbalance of equal weight.

The bench that can be seen in the second picture used to be the location of a geo-cache for GPS enthusiasts. 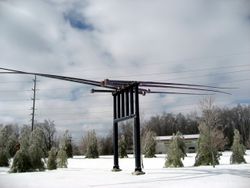 Frozen in place in 2007
Retrieved from "http://www.bloomingpedia.org/w/index.php?title=Untitled_2001&oldid=13277"
Categories: