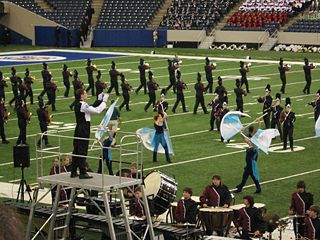 The marching band of Bloomington High School North, known as the Cougar Band is the marching band for Bloomington High School North. An astute, devoted, remarkable group of high school musicians, they march in Class B of ISSMA (Indiana State School Music Association). A historically successful program, they have been to ISSMA State Finals several times, most recently in 2018 where they placed seventh.

The band is led Thomas Wilson. The band's season kicks off in late summer, when Band Camp is held. At this week-long camp basic marching is taught to freshmen and rookie marchers, while at the same time the show is also being taught. After the school year begins, the band plays at Bloomington High School North home football games, performing the show at halftime. Practices during the evening are held at North so that the show can be finished and improved. In September the band also attends competitons on weekends; these are usually held in and around the Indianapolis area.

After a few weeks of competitions, the band attends the ISSMA District contest, usually held in Columbus, where their goal is to earn a Gold rating from the judges. If the band gets a Gold, they move on to ISSMA Regionals two weeks later, where the bands are better and competition is tougher. For many years, a band had to finish in the top five at Regionals to gain entry to State Finals. The Cougar Band accomplished this at the 2006 Regionals at Warren Central High School, earning a trip to State Finals in Indianapolis' RCA Dome one week later. They tied for 5th place to get their highest ever State Finals placing. However, ISSMA introduced a new competition in 2008, the Semistate meet, held one week after Regionals. To get out of Regionals, a band must place tenth or better. At Semistate, the twenty remaining bands in each class compete, and ten are selected to move on to ISSMA State Finals.

The 2007 Cougar Band show was entitled "Walking Through the MoMA". The show's music was modeled after the artwork styles of artists featured at the Museum of Modern Art in New York City. Stockhouse and Wilson visited the museum during the band's 2006 trip out east for the Philadelphia Thanksgiving Day Parade and liked what they saw. The show's first movement was modeled after Jackson Pollock, the second after Claude Monet, and the third after Piet Mondrian.

2008's show was entitled: "Lightsource: From Darkness to Light". It was a harmonic and visual journey from darkness into light. Music was once again written by Bruce McConnell. The band excelled with the show, getting a Gold at ISSMA District, sixth at Regionals, and tenth at the new ISSMA Semistate, allowing them to march in Lucas Oil Stadium in the ISSMA State Finals. On November 1, 2008, the band marched in Finals, earning ninth place in class B.

2009's show was entitled "Baroque Variations". It was based off of an old 16th-century theme called "Canarios" and featured a classical guitar solo. The band rode through ISSMA District, and finished fifth at the ISSMA Regionals at Evansville Central H.S. At the Semistate competiton, held on October 24 at Pike High School, the Cougar Band performed an incredibly strong show, finishing 8th out of the 20 bands, reaching State Finals again. At Lucas Oil Stadium for ISSMA State Finals on October 31, the band performed well again, placing ninth out of ten once again.

For the 2010 Cougar Band program, Thomas Wilson was pleased with the end result of the Baroque Variations show, and designed the next show in a similar vein. "Pulling Out All the Stops" was based on thematic material from the Maestoso (Finale) movement of the "Organ Symphony" (Symphony No. 3 in C minor, Op. 78) by Camille Saint-Saens. Bruce McConnell once again wrote music for the show, and the drill was again designed by Eric Berger. The band was awarded first place in Class B at the Spirit of Central Invitational on September 11, 2010. They placed third in class AA at the BOA Pontiac Regional on October 9, and seventh in class B out of eleven bands at ISSMA Regionals on October 16. At ISSMA Semistate on October 23, the band achieved the first ever State Finals threepeat in Cougar Band, placing eighth out of 21 bands.

At the ISSMA State Finals on October 30, the band placed tenth out of the ten Class B finalists. Greenwood took home the state championship.

In October 2007, the Cougar Band placed sixth at ISSMA Regionals, ending a successful ISSMA season on a sad note. Two weeks after Regionals, they attended the 46th annual Contest of Champions at Middle Tennessee State University in Murfreeboro, Tennessee. Bloomington North and Jasper were the only Indiana schools with bands in attendance. The Cougar Band placed first in class AA.

The Cougar Band participated in a BOA (Bands of America) regional competition in Indianapolis on November 7, 2009. It was held at Lucas Oil Stadium. Out of the 30 competing bands, Bloomington North finished a respectable 16th. They were designated as a class AA band for the event and finished fourth out of nine AA bands, and came within 0.05 points of placing third and returning for the evening show.

Many nationally-known bands also attended, including an Illinois band, Marian Catholic, which won class AA. Marching band state champions for Indiana in class A - the Marching Black & Gold of Avon - also came to the competition.

The Cougar Band participated in two BOA Regionals in 2010. The first came on October 9 at the Pontiac Silverdome, the old home of the Detroit Lions in Pontiac, Michigan. In the old stadium, the band performed a fantastic show and placed third in Class AA. They placed twelfth out of all bands, just below the cutoff for the evening finals.

The second was a return to the Indianapolis Regional, held at Lucas Oil Stadium on November 6. The band didn't place in their class, but received a Division II rating.

In keeping with previous years, the Cougar Band will return to the Indianapolis Regional on November 5, 2011.

Thomas Wilson leads the Cougar Band, overseeing practices and helping the band to learn and refine their show. Students at Indiana University are also hired to help the band, each one specializing in a different instrument.

The band is broken up into several sections: