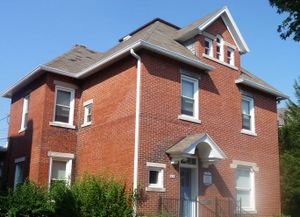 The Campbell House, a two-story brick house at 213 E. Kirkwood Avenue, is the Bloomington headquarters of Habitat for Humanity. It is named for Thomas Campbell and Alexander Campbell, co-founders of the Disciples of Christ Church in the early 1800's.

The site, then known as Lot 167, was purchased by the new First Christian Church in 1826 from George Richey and Lucy Richey for $61, and a log church building was placed on it.

In 1885, the church had created the large stone building next door, and the primitive log building was replaced with the current brick structure, to be used as a rectory. It was built using bricks from the older building.

Over the next hundred years, the house fell into disrepair, and some ill-advised additions and improvements were made. In 1988, church elders considered tearing the building down, but eventually gave it to Shelters Inc. to be made into a homeless shelter. In 2007 it became the headquarters of Habitat for Humanity.