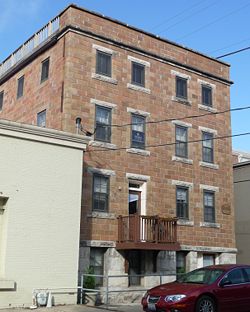 The Cantol Wax Company, originally founded in 1909 in Buscamente, Mexico by Harry Timolat, was moved to Bloomington in 1920 after Timolat's daughter met and married Paul McNutt. The company extracted the juice of the candelilla cactus plant to manufacture furniture polish. McNutt, later governor of Indiana, served as treasurer of the company for a time.

Thomas Lemon worked for Timolat as an office boy, and then bought the company after Timolat's death in 1937. Lemon, later mayor of Bloomington, owned and operated the business until it closed. Belknap Hardware of Louisville, KY was the biggest customer, serving as a wholesaler for the Cantol Wax products. The company thrived during World War II, but finally succumbed to competition from larger companies, including the Johnson Wax Company.

The Cantol Wax building at 211 N. Washington Street, originally built for the Oakes Manufacturing Company in 1905, is a terra cotta block building with a rubble face limestone foundation. It is taller than the other buildings on the block and has a distinctive pink hue.

The building was erected by Bloomington businessman Lucian Oakes, whose company made farm incubators and incubator supplies. It replaced a tin and machine shop on the same site. The factory was closed around 1916 and the building apparently for a time was the site of Captain J.F.A. Mitchell's Fish Market and Poultry Company.

After the closing of the wax factory, the building was used for storage, first by the Wylie Furniture Company and later by One Call Communications. Later, it was converted to apartments by owner David Ferguson. It now has five two-bedroom apartments — two on the first floor, two on the second and one on the top. Each has an exposed-beam look and an open floor plan.

The top apartment has access to an elegant deck on the roof of the building that overlooks the central city. The rooftop space features a whirlpool spa, plants and a comfortable seating arrangement.