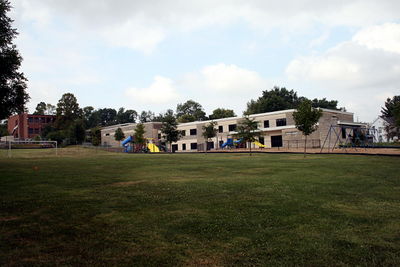 Fairview Elementary School is one of the oldest still extant schools in Bloomington. Originally constructed in 1893, the building was expanded in 1928 and 1954. The original building, designed by Wing & Mahurin and located at 7th and Fairview, was demolished in 1954 when the addition at 8th and Fairview (designed by McGuire & Shook) was built. A new school was built in 2010 at the corner of 7th and Rogers and the 1928 addition and the 1954 addition were demolished. A large chimney-like structure was also built to house chimney swifts that formerly inhabited the demolished 1928 addition chimney.

Fairview serves some of the poorest neighborhoods in Bloomington. Many students live in government subsidized housing and attend after-school programs such as those at Banneker Community Center and the Boys and Girls Club.

In 2007, the school failed to make Adequate Yearly Progress as defined by the No Child Left Behind act for the fifth year in a row. This forced the school to submit restructuring plans to the state. Several suggestion were offered, including tearing the school down and building a new one on the same site, and building a new school on the land of Butler Park.

The school was almost closed in 1983 due to declining enrollments and a lack of money, but was kept open after the MCCSC School Board voted to accept state funding for smaller class sizes. At that time Elm Heights Elementary, Brown Elementary and Sanders Elementary schools were closed.

In 1990, the school was extensively renovated, including new carpet, wall covering, windows and gym flooring and a cleaned-up exterior.

L.E. Dyer served as principal of Fairview for a time. The principal as of 2013 is Tommy Richardson.

The Fell Iron & Metal company was about a block away from the school. When PCBs became an issue at the company many parents became concerned about possible airborne contamination from the cleanup. The EPA assessed the risk as very slight, however.

In 1913 the congregation of Fairview Methodist Church moved into a new church located on the southeast corner of 8th and Fairview Streets. The congregation was embroiled in controversy when plans for a new segregated school for African-Americans were announced in 1915. The school was slated to be built on another corner at 8th and Fairview. The congregants claimed that they were opposed to a school generally, not to a ‘colored school’ specifically. Press coverage indicates that this was not universally accepted, perhaps because Fairview School, a whites-only school built in 1893, was located on Seventh Street just south of the church. The school board abandoned plans for the 8th and Fairview site and built the Banneker School at Seventh and Elm Streets for use by African-American children.

Fairview Methodist Church burned to the ground on Christmas night 1921. The congregation responded quickly, building a temporary structure in a matter of days and vowing to build a permanent church on a budget of $65,000. But the subject of rebuilding would soon split the church into factions, one in favor of a style commensurate with what had been lost and another in favor of a less stylish brick church. Litigation ensued. A new church, built of brick, was dedicated, more than three years after the fire, in May of 1925.

This church, located on 7th Street a short distance away from the site of the 1913 church, is still home to the congregation.

Racial tension rose again in 1951 when Fairview School, still whites only, became overcrowded. The Parent Teacher Association circulated a petition asking that a new school addition be built and that Fairview students not be reassigned to the Banneker School, still African-Americans only.

Responding to charges of racism, the PTA president indicated that opposition to reassignment was not racial, but merely an effort to ensure that construction of a new school was not declared unnecessary due to resolution of the overcrowding issue by means of reassigning students to Banneker.

But by this time the tide had turned and events progressed differently than they had during the search for a site for the Banneker school. In 1949 the Indiana Legislature had passed a bill that marked the beginning of the end for segregated schools in Indiana.

In July of 1951 the Bloomington school board changed the name of Banneker School to Fairview Annex, effectively combining the two schools.

In September white students attended school with African-American students at that site.

An addition to the Fairview school was completed in 1954. The addition was located in part on the site of the 1913 church. In April, nearly forty years after the original controversy about the location of the ‘colored school’, all children from Fairview Annex were reassigned to the new wing. African-American children finally had the opportunity to attend school at the corner of 8th and Fairview, albeit on the corner where the church formerly stood and not on the corner the school board had proposed.