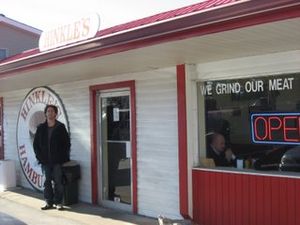 As seen from across 6th Street

Hinkle's Hamburgers is a restaurant at 206 S. Adams Street across from Rose Hill Cemetery.

Hinckle's Hamburgers is a revered Bloomington eatery whose straightforward motto is "We Grind Our Meat Fresh Daily." Famous for its burgers, Hinkle's has grilled the "Hinkleburger", a burger consisting of fresh ground chuck, fresh onions, pickles, salt and pepper, since opening in the 1930's.

As many as three Hinkle's restaurants have operated in Bloomington simultaneously. The original restaurant opened for business at 403 E. 10th Street in 1930 by owner Winfred Hinkle. It moved to the Adams Street location in the Sixties. Later the restaurant was run by his brother Leon Hinkle until 1989.

in 2019, Scott Clark, the manager and son of owners Gary and Deborah Clark died unexpectedly, and the restaurant was closed. Family friend Richie Shields bought the restaurant and reopened it later that year.

Currently, Hinckle's operates out of a small, unassuming location at 206 South Adams Street, just west of the Rose Hill Cemetery between Kleindorfer's Hardware and Cresent Donuts.

With minimal advertising, seasonal patterns of operation, and hours of operation restricted largely to lunch, Hinckle's has survived on the merits of their stock in trade: hamburgers, pork tenderloin sandwiches, and other classic American delicacies.