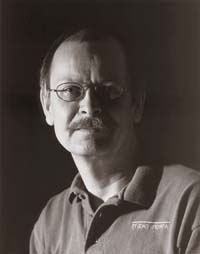 In 2003 the Bowers founded a new publishing company, Studio Indiana, to produce Indiana photography books, based on John's black-and-white photography. 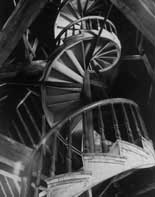 While our society values the newest, the costliest, and the flashiest, I'm motivated to rediscover that which has been ignored, forgotten, or cast aside. By using the inherent drama of black-and-white photography, I'm able to capture the essence—the élan vital—of these subjects. To me, the abandoned houses and rusting automobiles dotting the countryside retain a special energy left behind by their former owners. I sense this energy being particularly strong around an object made by hand—an oak balustrade, a marble cemetery statue, a forged iron gate. I also find it clinging to derelict machinery and old factories where skilled workers practiced their craft. In exploring back roads and out-of-the-way places, I've been pleased to discover fascinating aspects of Indiana's unique heritage. My goal is to preserve, on film and in books, the richness, significance, and value that surrounds us—yet often goes unnoticed—so it can be experienced and appreciated by others.

John's photography books include The Common Good (2010), Journey's End (2009), 'Silent Workplace (2008), After the Harvest (2007), 2nd Stories (2005), Guardians of the Soul (2004), and Lingering Spirit (2003). He has received 5 Individual Artist Grants from the Indiana Arts Commission (2004, 2006, 2008. 2010, 2012), and his work has been shown in numerous one-person, two-person, and juried exhibitions. John was named an Indiana Artisan in 2008, and began serving a 3-year term on its Board of Directors in January 2012. In early 2011, he and his wife, Lynn Bower, were named Distinguished Hoosiers by Governor Daniels. John gives PowerPoint presentations, at libraries, historical societies, and other venues throughout Indiana, about his work.