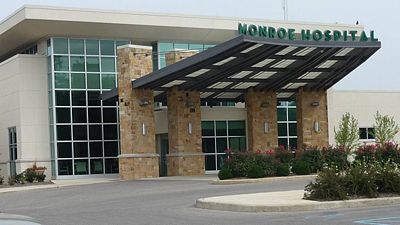 Monroe Hospital is a private hospital on the south side of Bloomington at SR 37 and Fullerton Pike. The hospital broke ground on May 10th, 2005 and was completed in 2006. It has 10 examination rooms and 5 surgical suites, as well as extensive patient amenities in each room, such as internet access and flat-screen TV.

In 2004 a corporation calling itself Southern Indiana Medical Park II bought 50 acres at the location from Bill C. Brown at a cost of $3.5 million. The next year, 12 acres of the land were sold to Medical Properties Trust, an Alabama medical property management company, for $3.6 million after negotiations were completed to allow the company to build the new hospital and lease it back to SIMP-II. The only known members of the corporation are Daniel Grossman and Kamal Tiwari, but it is reputed to be made up of roughly 30 Monroe County medical practitioners, each with a net worth of over $1 million.

It had been announced that Tennessee-based Surgical Development Partners would be responsible for management of the facility, and Jerry Dooley was named interim CEO. But in April 2006, the hospital board replaced the management company with MindGent Healthcare Services of Indianapolis, saying they felt the former company was too far away, and named Dean Melton as CEO.

Monroe Hospital served its first clients on October 16, 2006, despite objections from the other county hospital, Bloomington Hospital, which as a public facility opposed any in-county competition for its profitable services.

Dean Melton served until March of 2007, when it was revealed that the hospital was on shaky financial ground. At that point Melton was replaced by Mike Soisson of Vibra Healthcare to be the third CEO in the short life of the hospital. Vibra Healthcare was an investor in the property. At the same time, a new loan from Medical Properties Trust was secured for the continuing operation of the facility.

Dale Armstrong served as the fourth CEO of Monroe Hospital, and Vibra Healthcare continued to oversee the hospitals development.

Fred Price serves as current CEO of Monroe Hospital; he was appointed to the position in 2008.

In late 2009 MPT replaced Vibra Healthcare with Healthcare Management Partners, LLC; the move was shortlived however, and the hospital was soon back under Vibra's management.

In the summer of 2012 CEO Fred Price resigned and the hospital management was taken over by St. Vincent Health.