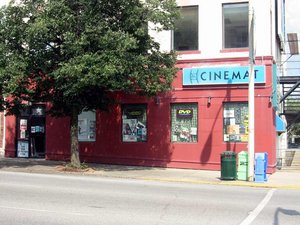 Picture of The Cinemat from Walnut Street

The Cinemat is a movie rental store at 123 South Walnut Street. They offer a wide variety of films including independent, foreign, classic, art-house, documentary, animated, experimental, silent, GLBT, music documentary & musicals. The Cinemat also has a screening room where you can watch movies on a big screen with big sound and supports large groups.


In February of 2009, the Cinemat announced plans to close its doors, selling off some of its stock and sending the rest to Plan 9 Video. Shows booked at the location would continue to to be played through May.

Owned by Steve Volan, The Cinemat opened on August 30, 2002 offering movie rentals. It quickly expanded and on August 6, 2004 it opened Bloomington's only screening room for groups and events.

On November 17th, 2006 they announced that their website has a new feature that allows customers to search their entire movie library online.

The Cinemat has a mailing list for announcing upcoming screenings. Information about it is available at https://mailman.kiva.net/mailman/listinfo/cinematsr

On August 26th, 2006, someone posted to the mailing list with the simple words "Please remove me from your e-mail list". The list was configured so that anyone subscribed to the list could post to it. It was also configured so that the poster's from address was masked out to hide the sender any message posted to the list. So once one person asked to be removed, several other people (10+) started replying and asking to be removed. Mark Krenz replied back to the list with information on how people can remove themselves from the list.