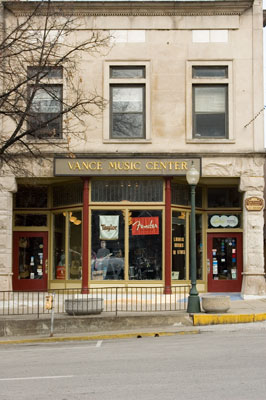 As seen from across 6th Street.

Vance Music Center was founded in March of 1948 by Berny Vance. He created a chain of stores in Bedford, Martinsville, and two in Bloomington. The Bloomington stores were located in the College Mall and on the square. Eventually, three of the four stores closed leaving one store open on 6th Street in Bloomington. Phil Gause who worked as the general manager of Vance from 1977-1995 purchased the store in 1995 from Mr. Vance. His son Eric was the store’s general manager.

Vance Music Center was well known for its wide variety of products including guitars and guitar accessories, amps, PA equipment, pianos and keyboards, violins, violas, cellos, mandolins, banjos, drums, and percussion. Vance tried as hard as they can to set the prices of their products low. They always made an effort to compete with large chains such as Sam Ash and Guitar Center, though this was difficult to do sometimes.

Vance offered musical instruction on many different instruments. Private lessons were priced at eleven dollars per half hour in 2006. Many graduate students in Bloomington offer private lessons at very high prices, so Vance was a reasonable alternative to many private teachers in Bloomington. Vance had three guitar teachers, two drum/percussion teachers, and a piano/saxophone teacher, all who had years of musical training under their belts.

Vance also offered a repair service for a variety of instruments. They offered piano tuning, done outside of the store, as well as electronic keyboard repair. They also offer guitar and amplifier repairs.