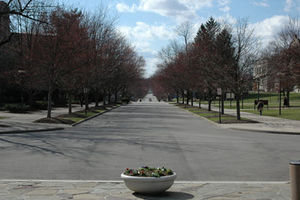 On the west side, 7th Street continues out until hitting the Illinois Central rail line at Ritter Street. Two blocks on the far side of the railroad behind Valhalla Memory Gardens are also considered part of the street.