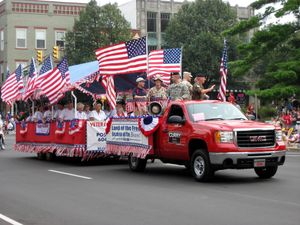 The 4th of July Parade is an annual tradition in Bloomington as it is in almost every other town in the United States. Until 2009, the parade had usually started at 11th Street and runs directly through downtown south along College Avenue, crossing over at 4th Street and then back north up Walnut Street. In 2009 the parade ran along 7th Street from Indiana Avenue to College, turning down to Kirkwood Avenue and returning towards the Sample Gates.

There are musical performances and street artists that also perform before the parade begins. Local vendors offer food and drinks from carts and wagons as well as balloons and other fun items for children. Many of the stores on the square look forward to the large number of people in the area.

For several years, the parade was held in the afternoon usually at 3pm, however in 2007 it was decided to hold it in the morning at 10am in order to beat the heat. Despite the earlier starting time, the turnout for the parade was about the same.