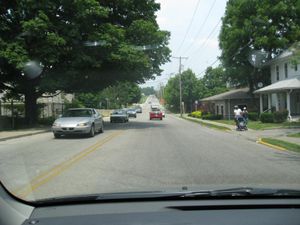 Rogers Street is a north/south street on Bloomington's near west side. It exists in two unconnected segments, one being many times longer than the other one. The short northern segment begins at 15th Street and runs for about 518 feet until its end at 13th Street, just next to--but in no way connected to--the bridge that carries Madison Street over the railroad tracks where it turns into the southern, long spur of Rogers Street. This segment begins at the southern end of the bridge just north of a 4-way stop with 11th Street, and runs for about 5.2 miles until meeting its southern terminus at Walnut Street (or Business 37 as it is called on the far south side of town), very near to Walnut's southern meeting with SR 37.

As Old State Road 37 passed through Bloomington, it ran on Rogers Street. This section is therefore part of the Dixie Highway.

Rogers Street is popular for use, connecting many points with downtown, like the Bloomington Hospital, country club, Batchelor Middle School, and the area of Clear Creek.

Landmarks passed on or very near to Rogers Street are:

Several restaurants had been on Rogers Street in the 1940's, when the RCA plant was at its peak. These included: