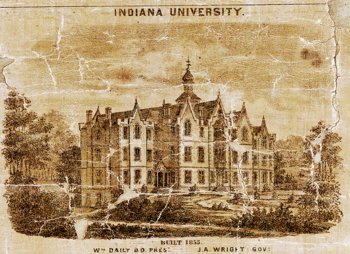 The Old College Building was located on the original Indiana University campus, southwest of the corner of Second and Walnut Streets. At the time, College Avenue did not extend south of Second Street and the building was situated at the foot of College Avenue. The building was formally dedicated in 1856. William Tinsley of Cincinnati was the architect and Jonathan Rogers was the general contractor.

Construction was begun in 1855 due to a fire the previous year that destroyed the First College Building.

When Science Hall on the old campus burned in 1883 the campus was relocated to Dunn's Farm, a few blocks east of the courthouse square. The Old College Building continued to be used for University purposes until it was sold to the City of Bloomington in 1897. The roof and third story were destroyed by fire in 1900 and John Nichols was engaged to draw plans for rebuilding.

The City used the building for public schools, including a period as a junior high school. In June of 1925 the building was being used as a grade school when it was condemned for fire code violations. The inspector called it the most unsafe building he had ever seen. The condemnation led to the construction of Elm Heights School.

When the Rose Well House was built on the Dunn's Farm campus in 1908, portals from the Old College Building were removed and incorporated into the well house.