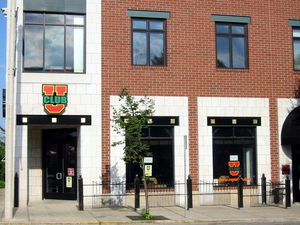 U Club was a locally-owned upscale casual restuarant located at 254 N. Walnut Street. It was opened in October 2005 by business partners Mark Gilcrest and Peter Dvorak. It closed in December 2006 While the name suggested a sports bar, unlike its contemporary nearby Scotty's Brewhouse, the U Club atmosphere was more akin to Tutto Bene and Grazie!. Dress was casual and reservations were accepted.

Mark Gilcrest has ties to Bloomington, though he is a Chicago native. His parents were both native Hoosiers and went to school at Indiana University. They were also married in Bloomington. Gilcrest still maintains a home in Bloomington as well as Chicago.

The menu featured upscale American and Italian dishes. There was a wide variety of food with a menu that featured old photographs of the Bloomington area. There was a full-service bar serving beer, wine and mixed drinks. On Sunday, there was a brunch from 11AM to 3PM.

The banquet room played host to three large paintings with ties to Bloomington. The large painting on the west wall was a Bloomington street scene painted in 1987 from the Graham Hotel Building. The owner acquired it when a local business could no longer house it. The other two paintings on the south and east walls were acquired by the owner in a Sotheby's auction. Mark Gilcrest found a small card in the oil painting on the east wall that showed that the painting had been owned by a former Bloomington resident who was a professor of art history at IU.